Torontonicity was invited to attend the media preview of Francis Bacon and Henry Moore: Terror and Beauty on April 2, 2014 at the Art Gallery of Ontario. Curated by Dan Adler, the show pairs two artists who differed extremely in their private lives, but were both influenced by Modernism and the political events of their time. Dr. Francis Warner, Emeritus Fellow, St. Peter’s College, University of Oxford, knew both artists and attended the media preview. The show, which runs from April 5, 2014 to July 20, 2014, features over 100 works from around the world, including the Tate Britain, The Museum of Modern Art and the Museo de Belles Arte, Bilbao.

The exhibition opens with photos by Bill Brandt of Londoners taking shelter in the underground while London was being bombed during World War II, and London in darkness. Moore spent time in the underground shelters drawing similar sketches of these Londoners. The struggle to survive was one of the themes Moore examined throughout his life’s work.

Dr. Warner called Bacon and Moore “two sides of the same coin.” Both artists were atheists. Curator Dan Adler noted that many of the pairings of Bacon’s and Moore’s work in this exhibit correspond in terms of “poses, moods, in other words vulnerability, and subject matter, for example, the Crucifixion…there is also a sense of violence in both works.” Adler noted that Bacon’s paintings of the Popes “gave them a prison; they are fragmented, damaged, utterly alone.”

Dr. Warner spoke to Moore about the Crucifixion during Moore’s last days. The artist noted that the Crucifix formed a “Y” position, offering no support, and since Christ was nailed to the cross, it brought out the suffering even more.” Again, there is the theme of vulnerability. From a non-religious perspective, Bacon regarded the Crucifixion as “an act of man’s behaviour, a way of behaviour to another.”

I was overcome by the exaggerated form of Moore’s Woman. Moore revealed that nearly all of his sculptures were of women. Demonstrating the theme of fertility, Moore says of this sculpture: “[It] has that startling fullness of the stomach and the breasts. The smallness of the head is necessary to emphasize the massiveness.”

According to Dr. Warner, one of the reasons Henry Moore gave the Art Gallery of Ontario his gallery was to acknowledge Canada’s role in assisting Britain during World War II.

Many of Bacon’s oil paintings in this collection are dramatic and bold. “During my childhood, I lived through the revolutionary Irish movement, Sinn Fein and the wars, Hiroshima, Hitler and the death camps and daily violence that I’ve experienced all my life. And after all that they want me to paint bunches of pink flowers.” — Francis Bacon

When asked what these two artists teach us today, Dr. Warner replied, “I have to see it in terms of the war and Churchill’s message: Never give up.” Curator Adler responded, “The reclining figures are damaged and yet they persist.” 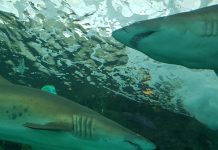 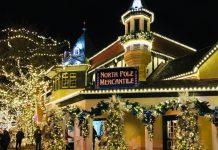 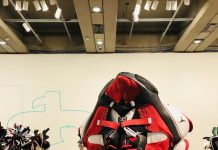