What do you expect from a place called Freshii? Fresh foods. Food that leaves you feeling light and energized and perhaps one meal closer to being that fit and fabulous you. Indeed Freshii is a fast food restaurant that is friendly to vegetarian and health-conscious people and they have just opened another location: Freshii Liberty Village in Toronto.

We were invited for a complimentary tasting at Freshii Liberty Village, which is a great location for those who work, live or play in Liberty Village, or along King or Queen West. I also found out that it is only a 10-minute walk from the Enercare Centre at Exhibition Place. We just walked over from Canada Blooms for a healthful dinner.

Freshii is super popular around the word: they’re opening franchises at the rate of one a week, owner Libby Kennedy told us while describing her adventure in opening this location. She is very passionate about bringing healthy food to people who don’t always have time to cook. 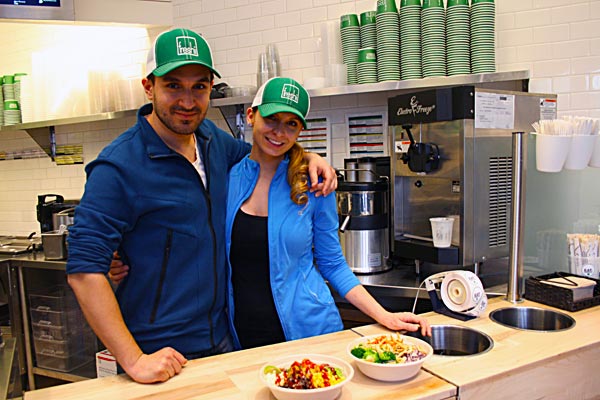 All items are vegetarian, but omnioves can add chicken, steak or turkey carnitas to their bowls if they don’t wish to have a meatless meal or can add tofu to keep it veggie. You can also make kale or quinoa a base for your design-your-own salad. Other items on the menu include soups, wraps, burritos, fresh juices, smoothies and a breakfast menu. You’ll have no problem customizing any dish for your specific dietary needs.

We shared our two dishes so that we could enjoy a bit of both. The Buddha’s Satay rice noodles is tossed with crispy wontons, carrots, broccoli, cabbage, green onions and peanut sauce. It is a fresh and mild-tasting dish. We were hoping for a little more flavour.

We also had the Pangoa with brown rice, avocado, black beans, aged cheddar, corn, cherry tomatoes, cilantro, lime wedge and fiery bbq sauce. Now this is a mouth-watering dish and pretty spicy. I asked to have it topped with falafel.

If you crave a bit of dessert after your meal, a small serving of Freshii’s frozen yogurt is a tasty, low calorie treat. I do get those cravings and found the frozen yogurt cool and sweet. Go for the fruit and nut toppings rather than cookies and processed goodies to keep it on the healthier side.

We ate perched on a couple of stools. Currently, the Liberty Village location is designed for take out. However, in the summer, there are hopes to have outdoor seating.

Freshii’s mission is to provide healthy, responsible eating combined with green business practices – 100% of their packaging is re-cyclable and/or bio-degradable. Two thumbs up for Freshii’s eco-friendly offerings and carbon-footprint reduction. Their mission is to be good to the earth by eliminating traditional industry staples: excess packaging, heavy energy consumption, and greasy processed meals.

One of the things I love about Freshii is that it has multiple locations so now that I am familiar with its offerings, I can pop in at a location near me, wherever I happen to be when I’m hungry. It’s a good place to go for a salubrious meal at a pretty decent price.

Freshii at Liberty Village is at 85 Hanna Avenue underneath GoodLife Fitness. Freshii is open daily from 8:30 a.m. to 7:30 p.m. 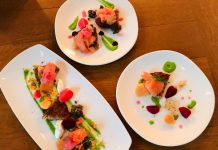 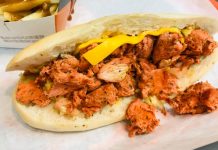 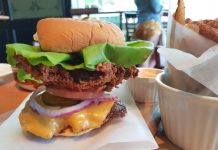