The second annual Eatable Film Festival runs October 22 to October 25, 2016 at The Royal Cinema. The festival pairs Toronto’s love of food, film, and culture, giving us a rare chance to watch cinema while enjoying gourmet delicacies from notable Toronto restaurants.

I watch Portrait of a Garden and who would have imagined that spending 98 minutes inside the beautiful garden on a estate in The Netherlands could provide such pleasure? I love spending time in the garden but, with the cold weather upon us, I spend very little time in it – so I get to enjoy the garden in a theatre. What happens is that in a picturesque garden, two long-time friends, an 85-year old pruning master and the gardener, tend to the gardens of an estate. Surrounded by vegetables, trees, and vines, they talk about everything including their disappearing craft.

Chef John Horne of Canoe Restaurant watched the film a few times over in order to prepare this lovingly thought out dessert plate served to us at the Eatable Film Festival. Artfully concocted comestibles were given to us to savour while we watched gardeners at work, sharing with us their expertise and passion.

The plate had an apple covered with a birch caramel – the crispy crunch of the apple was very satisfying and the birch flavour made it gourmet. The pear was nicely poached in spices. The fluffy cotton candy was butterscotch flavoured. There were chocolate twigs, rocks and also some chocolate soil at the bottom – much like a garden. There was also an anise carrot but I sadly couldn’t taste the anise. This is definitely not the typical movie fare. I really enjoyed it.

The pear cocktail was a dream. It was so good that I wanted several of them. Every sip reminded me of the poached pears I made at The Market Kitchen a few days before and enjoyed thoroughly with my boyfriend. I had already sipped some before taking the photo (couldn’t wait!). I took the photo and quickly sipped the rest..with small sips, of course.

The filmmaker, Rosie Stapel, has woven together visuals and conversations into a tapestry that takes us through a full year in the garden. Meanwhile, Chef Horne created a tapestry of flavours to complement the film.

Portrait of a Garden is in Dutch, with English subtitles. Running time: 1 hour 38 minutes. 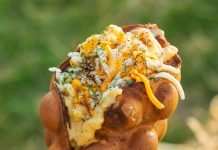 Food Festivals in Toronto in Summer 2019 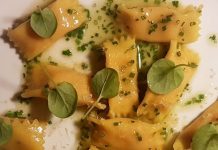 The Gourmet Food & Wine Expo 2018 Is a Foodie’s Delight