Walking into the vestibule entrance of the new Figures Restaurant at 137 Avenue Road, it looked like I had arrived at a comic book store that would be the envy of Sheldon Cooper, but where was the entrance to the restaurant? The hostess revealed that the door to this new Toronto resto-lounge is hidden in the cartoon-covered wall of the vestibule to present a speak-easy vibe. It’s worth spending a few minutes at the front to admire the classic Marvel comic books and Batman figurine collectibles that are showcased.

Figures Restaurant is housed in a Yorkville restaurant space that has seen several changes in the past year, with the most recent incarnation being Coco Lezzone. With foot traffic from local Yorkville hotels, Figures is bound to attract celebrities and Toronto’s foodie elites to taste its extraordinary cuisine.

As we walked in, we were led upstairs to a long, narrow, dark room that featured elegant banquettes and tables and a bar along one side. Covering the walls and ceiling are murals of famous action figures to stare you down while you eat and drink.

The creative menu features tapas style small plates – and, a word to the wise – plan on ordering three plates per person if you are coming for dinner so you don’t leave hungry.

At the recommendation of our server, my dining partner opted for the Maleficent cocktail, $19, a concoction of double still rye, Bruichladdich The Classic Laddie Single Malt Scotch Whiskey, pineapple and lime juices, sage and bitters. She described it as “an enticing blend of flavours with some sweet, not spicy and a little kick.” The drink was served lit on fire for added drama.

Owners Nader and Patrick Marzouk obviously have a love of comic book heroes and action figures and have shared their passion as the theme of Figures. Don’t make the mistake of thinking that the whimsical theme translates into casual cooking; this is fine dining at its best with Executive Chef Ron Stratton showcasing his talent in innovative dishes such as Beet Chevre Truffle, Cherrystone Clam Fava Bean and Octopus Escabeche.

We started with Fennel Kalamata and Saffron, $18. The fennel was cooked to perfection, releasing its licorice-tasting essence, with still a bit of crunch. The Kalamata olives provided a satisfying saltiness to the fennel’s sweetness.

Our second plate was the Fairytale Eggplant Sesame Chickpea, $12. The eggplant was really tender and we wondered whether it had been braised to achieve this effect. The sesame elevated the taste of the eggplant with its nutty flavour, while the chickpeas provided an interesting contrast in textures.

Our third plate to share was the Coho Salmon Sunchoke, Dandelion, $24. This was one of my favourite dishes: the salmon was so tender – it just fell off the knife – while the artichoke puree provided a smooth, earthy mouthfeel.

Next up was the Octopus Escabeche Black Garlic, $20. The octopus is cooked and served cold so that you can taste its full flavour. Both my dining partner and I agreed that the texture was not fishy at all and somewhat similar to chicken. The Black Garlic sauce was delicious for drenching these scrumptious molluscs.

I still had trouble connecting the comic book theme with a fine dining establishment. As if intuiting my puzzlement, Nader and Patrick explained to us that walking into a comic book themed restaurant made you feel relaxed. And in order to appreciate good cuisine (or anything quite frankly), you need to feel relaxed. And that is the missing link that made me understand the connection.

Oxtail Plantain, Red Stripe, $18, was our fifth plate. I wasn’t enamoured with the plantain pancake, finding it too doughy and bland, but the oxtail was rich and lean, with flavour that was enhanced by the lager…delicious!

The A5 Kobe Beef Maitake XO Sauce, $70, is a gustatory sensation. Figures uses Japanese Wagyu beef sourced from the Miyazaki Prefecture or Kagoshima Prefecture in Southern Japan. The beef was melt-in-your-mouth tender, with a rich flavour enhanced by the dried-seafood XO Sauce. It is cooked in a vertical position so the top is medium rare while the bottom has a crispy base. The Maitake mushrooms, which grow in clustered leafs, added an earthy taste to the dish. This is a must-have dish at Figures. With Spider-Man hovering above us on the ceiling, I was concerned that he might use his web-shooters to steal our delicious Kobe Beef.

For dessert, we ordered the Beignet Nutella, Blood Orange, $14. These crispy pastries were good, particularly the hazelnut flavoured one; however, we couldn’t get beyond calling them “good, fresh donuts.”

Our second dessert plate was the Mexican Chocolate ($18), which was a hollow round egg of dark chocolate that enclosed a soft brownie sprinkled with 22 Carat Gold. This gives new meaning to the word “rich dessert.” Tucked beside the soft brownie were two mini action heroes. Was I supposed to eat them? The dark chocolate was delectable: rich, semi-sweet and fine.

The resto’s background music was lounge-style and at an appropriate level to allow for conversation for most of our meal. At 9:30 p.m., the DJ signaled that it was time to shift gears and the volume was definitely louder as he spun one of my favourites from the David Bowie songbook,“Fame.”

We thorough enjoyed the fine dining at Figures Restaurant. Drop by for dinner or late night bites: You will be in for a holistic sensory experience. 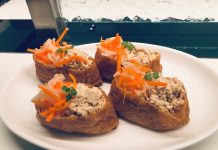 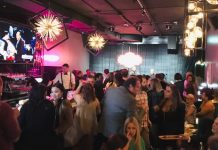 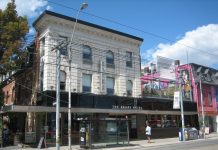 Celebrate Your Birthday in Style at The Drake This Year