Eat to the Beat returned to Roy Thomson Hall in Toronto on October 17, 2017. Torontonicity was invited to attend the annual culinary event, which raises funds for the Canadian Cancer Society for breast cancer research. KitchenAid was this year’s presenting sponsor for an evening that featured 60 female chefs cooking up delicious bites.

We started out with the Mini Cream of Chickpea Pot Pies from George Brown College School. These were creamy and mildly spiced with a shell made from quinoa. I found the shell tasty, but filling and I wanted to save room for other appetizers.

Our next stop was Elle Cuisine featuring Chef Lauren Mozer’s Shrimp and Grits. The shrimp were soft, succulent and juicy while the crunchy grits provided a contrasting mouthfeel.

I couldn’t wait to try the fresh-shucked oysters at The Chase Fish and Oyster’s food station. I initially tried Pink Moon oysters from P.E.I. and then returned a half an hour to try Sex on the Beach oysters from New Brunswick. I enjoyed both varieties of oysters, which were pleasantly briny and creamy. I couldn’t distinguish much difference between the two.

The line-up at Marigolds and Onions food station had us intrigued. They were serving up Piri Piri Shrimp and as soon as Chefs Tiiu Harnish-Christie and Tysa Harnish-Christie placed the shrimp on the platter, these tasty little morsels disappeared. The Piri Piri sauce was pleasantly spicy without being too hot. This was our favourite dish of the night!

We gravitated towards Mildred’s Temple Kitchen’s food station and were pleased to find Rice Noodles. Chef Donna Dooher’s rice noodles, which were a great balance from all of the seafood and featured squash, red peppers, cucumber and chili beef for a light and spicy dish.

Seafood lover that I am, I was attracted to the Japanese Hokkaido Bay scallops prepared by Chef Jennifer Mooers of Hooked. These raw scallops were silky, thick and melt-in-your-mouth.

My guest loved the Popcorn Panna Cotta prepared by Chef Manal Bashir of Victor Dries. These delectable bites were sweet and creamy.

There were many wonderful items at the Silent Auction including the following KitchenAid and beauty products:

For $25, you could purchase a Mystery bag. Some of the bags contained an iPad, Fitbit or LCBO gift card.

A live band performed Top 40 throughout the evening, giving this event a lively and fun vibe.

What a fun evening getting to sample a variety of foods from some of Toronto’s best chefs. I highly recommend attending Eat to the Beat if you’ve never been.

Eat to the Beat is an annual event that takes place each fall. The evening raises funds for the Canadian Cancer Society for breast cancer research. 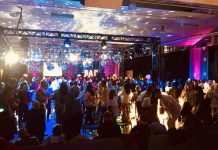 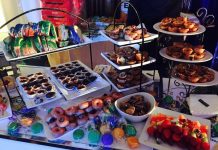 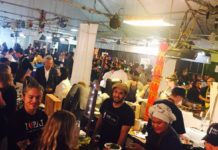 Enjoy Dishes from Toronto Chefs at Recipe For Change 2018