Hart House Theatre is now performing their third production for the 2018-19 season: Hair. The rock-musical is ambitiously directed and choreographed by Julie Tomaino, using the original 1967 lyrics by Gerome Ragni and James Rado, and music by Galt MacDermot. This larger-than-life musical is playing at Hart House Theatre from Jan 18, 2019 to February 2, 2019.

Director Tomaino describes in her notes how deceivingly easy Hair appears to be to bring together: a single unit set, no major costume changes, and a cast that remains onstage throughout most of the performance. After watching the show, I applaud Tomaino for directing and choreographing the entire show herself, as at times the sheer movement of all the bodies on stage comes across as the most organized chaos I’ve seen at Hart House Theatre yet! She did a great job maneuvering the cast through elaborate dance numbers, that still felt fluid and free-form, keeping true to the original intent of the musical.

As mentioned, there is only one stage unit with a handful of small moving parts – a few box-like platforms for cast members to bring to centre stage when required. Set Designer Brandon Kleiman created a raised platform taking up the back-half of the stage, with three steps that allow for levels when the entire tribe is singing together. The platform, side panels, and background are covered in a blue and green wash of colour that hides newspaper clippings and headlines. These colours come to life with the use of blacklight during a musical number to reveal a distinct pattern.

The set for Hair really came to life because of the collaboration between both set and lighting designers. Lighting design was done by Kirsten Watt, who clearly made acute decisions on when and how to highlight (or dim) a scene. Bold red lighting is used during a chaotic moment where the police are approaching the tribe, and transitions are seamless! I have to applaud Watt for her contribution of bringing the set to life.

A feature of the production that stands out immediately is costume, which was done by Kathleen Black. Her free-flowing costumes reflected the psychedelic colours and hippy style that are so characteristic of the late 1960s: leather fringe, bell-bottom jeans, floral prints, and vibrant headbands. Wig Designer Blake Arsenault brought the greatest array of textures and lengths to the wigs of each character, ensuring that their hair matched or emphasized their personality. I loved the costumes and wigs!

Another aspect that captured my attention was the voices of the cast members! In one incredibly impactful scene, the sheer volume and power projected by the entire cast singing in unison feels like a wave crashing over the audience. This makes the well-known musical numbers like “Aquarius” that much more impressive. Actor Andrew Perry plays Berger, and immediately demonstrates his vocal skills from the first opening number with a bold and rich voice that impresses – he also has incredible comedic timing.

David Andrew Reid plays Hud and can sing and dance like no other! Unfortunately, I think his mic volume was too low at times, so the power behind his voice was missed. Thankfully his dancing didn’t require amplification, because his movements were so fluid and graceful! He commits to every movement and follows it through completely making for gorgeous dance scenes.

Cast member Georgia Fox has powerful projection and a jewel-toned voice – so many layers with such richness. I would love to see her again in another musical with a lead role, so I could listen to her sing more! The same goes for Jaymie Sampa who is a member of the Tribe and plays Abe Lincoln in a dream sequence. Fantastic job by both!

On opening night, it was clear that nerves were quite high for the cast, as the opening number felt a bit stiff for some of the actors. It didn’t take long for everyone to feel more comfortable in their roles though, as everything seemed to flow fantastically after the first quarter. The commitment to character and storyline becomes crystal clear before intermission when the entire cast takes part in one of the more shocking scenes of any Hart House Theatre production I’ve seen yet. So if you’re planning on taking younger children to this show, please note that there is coarse language, mature themes, nudity, and sexually explicit scenes.

Hair may not be appropriate for the entire family, but I would highly recommend it for a night out with friends. The energy of the cast is infectious, and the entire audience left buzzing with excitement after opening night! If you’re a lover of classic rock, or just love musicals, you should absolutely check out Hart House Theatre’s production of Hair. Make sure to grab your tickets quickly though, as it has a short two-week run. Enjoy!

Hair at Hart House Theatre runs until February 2, 2019. Tickets are Adults $28, Seniors $17 and Students $15. On Wednesdays, student admission is $12. Book online and pick up tickets at the Hart House Theatre Box Office before the show. 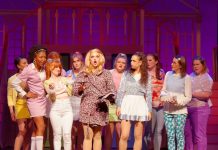 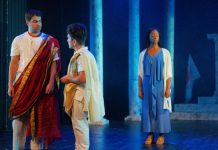 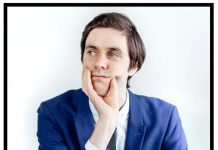