With Toronto and the rest of the country for that matter recently experiencing extremely cold temperatures during the end of December and early January, many of us have not wanted to venture outdoors. Let’s hope the rest of the winter is not as brutal. But staying indoors meant shifting focus on to other activities, such as cooking. It’s a great time to try out your new Instant Pot, slow cooker or blender that you received over the holidays, or experiment with new recipes to introduce into your meal rotation. Perhaps you have committed to becoming vegetarian or vegan in 2018? Although I still eat meat often, I am choosing to enjoy several meatless days during the week. On that note, I was eager to prepare a vegetarian version of Stuffed Peppers. This Stuffed Peppers with Spinach, Quinoa, Chickpeas and Feta recipe is packed full of protein and it’s also gluten-free. If you want to make it vegan, just omit the feta cheese.

I then stuffed them with the spinach feta chickpeas mixture and baked them at 375°F for another 15 minutes. Baking the peppers for at least 30 minutes really brings out their sweet and savoury flavour. I also used frozen spinach in this recipe because fresh spinach was not available in my grocery store. Although I squeezed a lot of the water out of the spinach before using it, there was still a fair amount of water in the spinach, which kept the spinach, chickpeas, feta, quinoa, mushroom mixture moist.

Let me know in the comments whether you make Stuffed Peppers with Spinach, Quinoa, Chickpeas and Feta and what you think of it. Bon Appetit!

If you like quinoa, check out our Beet, Quinoa, Feta and Avocado Salad. 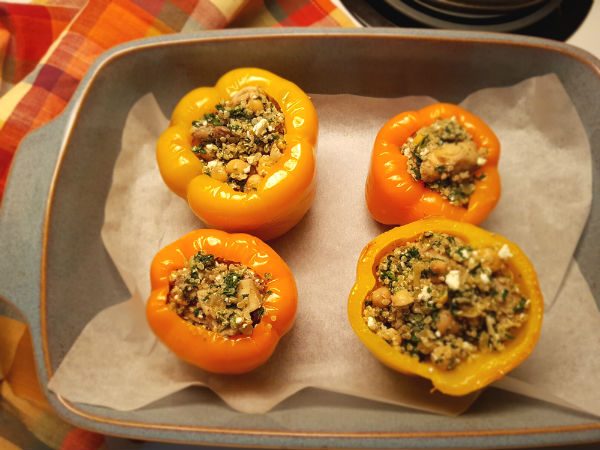 This site uses Akismet to reduce spam. Learn how your comment data is processed.

Lori Bosworth - January 15, 2020
10
January is the time when many people not only make resolutions but attempt to declutter their homes and lives to welcome new possibilities in...